From the trailer for Z, I was expecting a murderous imaginary friend, and that is definitely what I got. This movie is very focused around Z, who is seen, but more often than not suggested. Z’s presence is in every single frame of the movie from the moment we are introduced to them – which is quite a feat for an imaginary friend.

Z follows a family as they are terrorized, psychologically and physically, by their son’s imaginary friend. Little Josh (Jett Klyne) announced one day that he had an imaginary friend. All seemed well and good until parents Beth (Keegan Connor Tracy) and Kevin (Sean Rogerson) begin to notice that Josh’s behaviour is in decline. When I sat down to write a review, I expected to be writing about the visuals of the film. The use of a pair of gleaming eyes is suggestive of Z’s presence, but also featured in some clever misdirects – after all, kids imagine things in the closet or under the bed all the time, right? We are lucky enough to see Z, which I really appreciated. I loved the moments where things got serious or extra tense, and having Z as a physical presence really added to the weight of these scenes. These moments have the audience watching shadowy corners for the next few shots. The monster effects were fun, and best when they were kept simple.What I didn’t expect was the subtle way that Z twists the typical milestones that occur in these stories. On top of that, those subtle twists are used to great effect to reveal the cracks in a seemingly perfect marriage.Movies that feature a monstrous child (or an actual monster who seems to be framing a child), typically follow a pattern. The parents watch their child struggling, and perhaps get a therapist involved. They begin to argue, with one parent inevitably being manipulated into turning on the other to continue to get away with their murderous behaviour.While Z features these steps, it does so in a way that feels fresh. These two are walking on eggshells around each other, and all it takes is a stressor to bring that to the forefront. At one point they struggle to paint over a horrific image of Z that Josh has drawn on his wall in what appears to be black pastel or charcoal. As the white paint is rolled over it, the dark shows through, a stark metaphor for their marriage.The audiences sees Josh as a sweet child, but we are quickly made aware through Josh’s teacher that what is seen at home is not being seen at school. Even worse, one parent has been lying to the other when this behaviour has been reported home. A sickening number of escalating reports were shrugged off in secret with the argument that “sometimes kids get into trouble.” 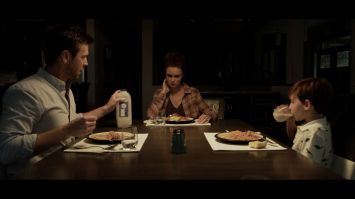 Beth, for her part, has a special perspective on this imaginary friend. She is struggling to hold it together as her mother is dying and her alcoholic sister struggles. There is even more tragedy in their past, and the audience is aware that Beth has worked hard to keep it there. She struggles with her childhood, worried about how her childhood might impact her parenting and therefore her son. Kevin is very much a man who does not want to rock the boat, and it illustrates how fragile and precarious he believes both his wife and his marriage to be.At one point, they have to agree that whatever is happening with their son is bad – there is a scene that just absolutely scared the shit out of me when Josh goes to play with a friend. Both mother and son are clearly feeling isolated as the parents of the children in his class outcast them both. There is one mother who feels guilt over this, as she and Beth were close. That wedge is very quickly and unexpectedly shoved between her last friend in a truly disturbing scene that works both as a jump scare and as the defining moment of that puts both Kevin and Beth on the same page.Beth long ago learned to be the unflappable one in any situation, and as a result when she falls apart, she falls apart big. She owns her decisions, and when the consequences pile up, she takes responsibility. Keegan Connor Tracy does phenomenal work here. She immediately accepts what she sees following her son. She trusts herself, and that trust takes her through an insane path in the third act.It is really difficult to talk about this movie without epic spoilers because the last act really pushed this movie into what feels like untreaded, original territory. It takes the best of the imaginary friend, the possession and the psychological genres and makes it its own. It is a living nightmare, plain and simple. People who have the unfortunate pleasure of having Z for a friend experience the fun of being a kid, but also the horrors of what is very clearly a one-sided, possessive, and abusive relationship. Allowing Z to interact with people other than Josh really illustrates that.For me, the ending did slow the momentum that had built up, including an awesome reveal of the monster. The action peaks, and you are dying to know what happens next. What happens is unexpected, to say the least, and I love when filmmakers try to stretch the expected ending and take the story further. While it makes sense, and I enjoyed the originality of it, it just changed the pace too much for my liking.The film is about overcoming tragedy, and the traps and patterns that we fall into. It is about what we are willing to do for our families, and what we aren’t willing to admit to ourselves. Fans of The Babadook will be very pleased by this film that stretches the boundaries of the types of stories that can be told around childhood and marriage.‘Z’ premieres on Shudder May 7Photos courtesy of Shudder

View all posts by @MorgBlog